Client: Irene
Quest:
A new VR system
is being developed.
Hunters are needed
to test its abilities.
Reward: ??? Meseta 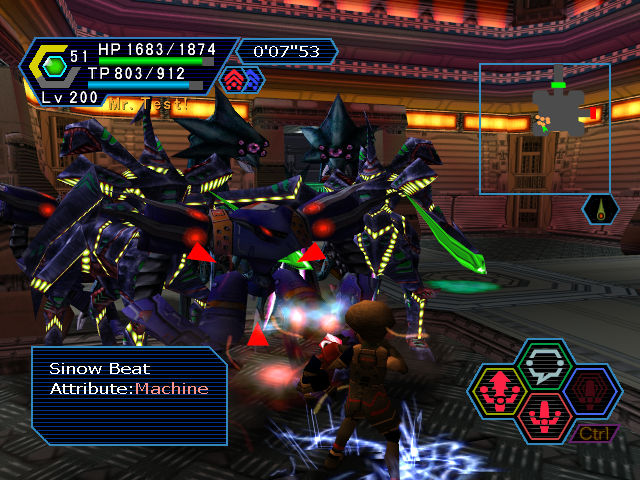 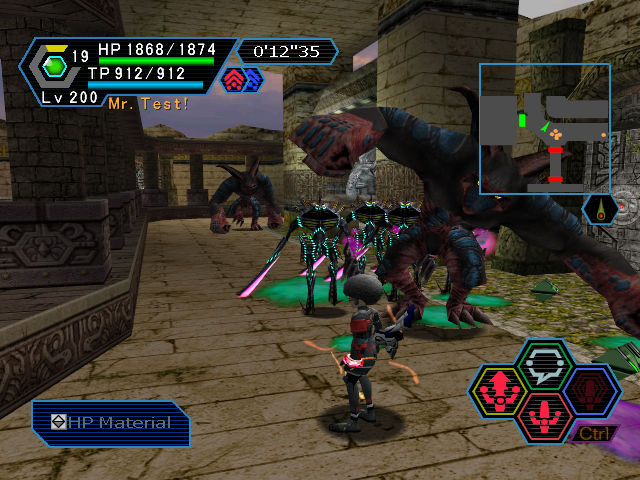 For the first time, it's possible to play Spaceship and Palace outside of Battle mode. ;o The quest works quite well, all things considered, but there are some problems. The main one is that enemies will not stay in their rooms. Once an enemy spawns, it will follow you forever. If you run into the hall, it will chase you. If you run into the previous room, it will keep chasing you. Unfortunately, if you leave the room where the enemy spawned, you can't target it anymore. You'll only be able to hit it with things that don't require a target lock, like Rabarta, Razonde, and traps. As such, once you spawn some enemies, you have to kill them (unless you can get them stuck against a wall to stop them from chasing you...

). Keep this in mind before playing the quest. If you can't deal with it, then don't play.

The maps themselves are broken because they weren't designed to be used in free play. The only way to fix it is to modify the client and fix the maps.

There may also be other problems that haven't been discovered yet. For example, neither Lee nor I have any idea where Spaceship and Palace get their drop information. They seem to drop items like Ruins 3 does (tons of Materials and lots of Meseta), but since these areas don't actually have their own information in the ItemPT, it's anybody's guess as to what weird things PSO is doing to make the enemies drop items. It is possible that if you play free play after playing this quest that the drops might be messed up... we don't know. In a nutshell, this is uncharted territory because we're using areas that aren't meant to be used. I haven't experienced any serious problems (FSOD, crashing, etc.), but your mileage may vary. I advise anyone playing the quest to actually pay attention to the in-game text, and if you find any bugs I haven't caught yet, report them. This is by far the most complicated quest I've designed (it has way more script than the others), and while I've tried to anticipate and fix everything that could possibly go wrong, I may have missed something. Let's hope not.

Lastly, if you are using the Dreamcast EP disc or if you have installed the Music Pack on PC, you will be able to hear Spaceship and Palace music in their respective areas. If you are using a vanilla PSO, then you're probably going to be annoyed by what's playing. To alleviate that problem, there is a Jukebox in the Quest Board to let you pick something else if you so desire.

That being said, kickass quest is kickass.

Finally we can fight monsters of varying attributes! xD

Watch out for the minibosses!

If you have the right connections, you might find an easter egg...

Aleron Ives wrote:
That being said, kickass quest is kickass.

Finally we can fight monsters of varying attributes! xD

Awesome, i'll have to try this out. Though, does this really has something to do with the DC/PC ship disappearing in moops screen shot? Or is it in the US ship now? Because I also noticed, the BRs have a ship now as well...Just curious since you locked that topic...

Baron_Von_Bullsh-t wrote:Awesome, i'll have to try this out. Though, does this really has something to do with the DC/PC ship disappearing in moops screen shot? Or is it in the US ship now? Because I also noticed, the BRs have a ship now as well...Just curious since you locked that topic...

not really disappearing, Ives was updating the quest list for prospective horizons to appear on the list.

Ships must be restarted for the Information Counter and MotD to be updated.

He can't. The Battle areas do not support the same enemies and objects as the areas in Episode II, nor do they have the same maps. If Lee used maps unique to Episode II, the quests would have to be completely redone. Even if he did use similar maps, all the enemies still have to be replaced. Since we can't have those quests, we have this instead.

Anyways, found a glitch, when I went to the temple area, I warped here instead. 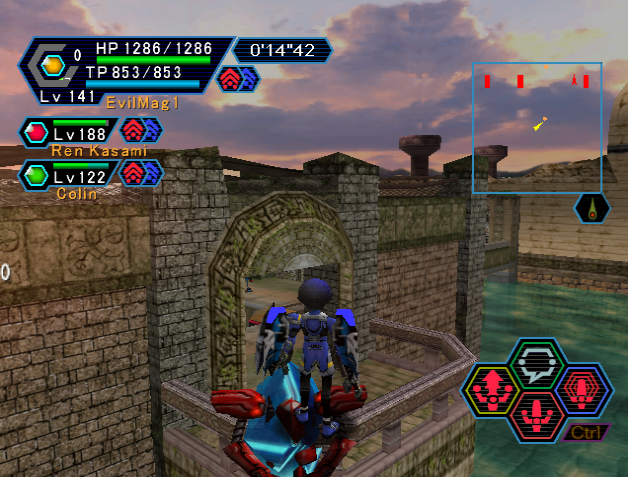 weird thing is that Wing can see me right here but colin doesn't. 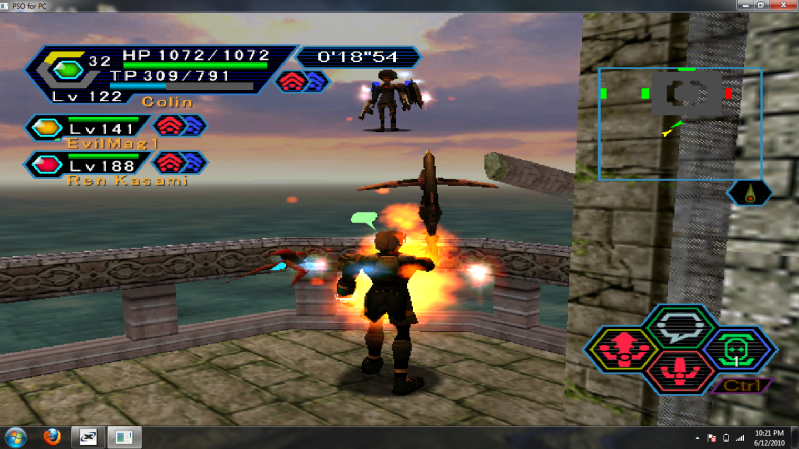 As for the bug, it is now fixed.

I know the easter egg that involves a certain NPC on Pioneer 2 that is a fomarl...

secret does not equal sidequest o.o

Did you die a thousand deaths?

I didn't even last a minute...

No. I shouldn't be anyways. I was level 21 when I just tried it out for shitz and giggles. Though it wasn't much of a try out heh...

That quest looks great!
..only now I need to get to ulti....

well mag wing and I didn't realize the upgrade did that it did.....but in all honesty if I hadn't d/ced we would have done fine (I had recently found my s-rank needle earlier in the day on an old backup) we died a few times at the beginning but once we got used to it then we probably would have made it after awhile. Took about an hour on ultimate though....that side quest would have taken forever, im kind of interested to see what prizes come about from it. (sjs anyone?) :p

Baron_Von_Bullsh-t wrote:No. I shouldn't be anyways. I was level 21 when I just tried it out for shitz and giggles. Though it wasn't much of a try out heh...

You should have seen the way it originally was. LOL. xD I had to tone it down over and over because it was nearly impossible.

It started out as frustration mode, or possibly impossibility mode.

well based off of the fact that we had two humars, A FOnewearl, S-ranks and level 30 techs, I'd still say it would be near impossible to get SS or even S rank on that setting, we managed to get A rank on normal Ultimate on our first run, but that stat change would be murder in the rooms with the massive amounts of torrs and hidelts x.x

Are the S and SS rank prizes really that good on those difficulties? xD

I'll save you some head bashing and tell you outright that there is no SS rank.

My guess is that they're the A-rank prizes but with high %s.

BTW Ives, I hope you're happy, your quest caused me to smash a table. fucking Torrs.

I just played it with MuCast on vhard (don't know which setting), and we got an A-Rank....
I died once... stupid hildeblue fell on me...