i had nothing to do wif their inbreeding

That's because you're weak and get corrupted every 6 months so you never get higher than level 110. xD

The second part is true to a certain extent, but is proven pointless by the fact that I do indeed have characters over that level, to which you are well aware that I have and have even played with when they were above 110, in addition, I got all my characters back. Just because I choose to play a version different from the one you chose to play after evaluating both of them enough to get a grasp on them, doesn't mean the term "weak" should even come into play, there was no point to the first statement being there.

P.S In addition, it wasn't because I couldn't handle ludi that I chose not to play it, you are well aware of the reasons as to why I stopped playing ludi and it was because of the drop rates, not because I was too "weak" to handle it.

You were addressing the difficulty level originally, not the EP as a whole.

I'm not by any means snippy, I'm simply addressing an infallacy with the aforementioned statement that started this, The reason I addressed the EP as a whole was to point out the reasoning behind why I don't play it, not because I wasn't able to hold my own or because I was too "weak" to play it, but rather for a different reason entirely to which was explained in my last post. I disliked the first part of your post simply because it didn't need to be there and seemed to be there solely for instigation, I can understand if you want to play the way you prefer with the EP and the difficulty level but I would prefer it if you chose not to go around calling people "weak" or otherwise simply because they choose to play a different way than which you prefer, As I stated before, I play ultimate because I prefer the difficulty there and enjoy playing it more, I don't by any means disrespect the way you play, so I would prefer if you didn't hint at making fun of mine

Speaking of snippy... It's never good to be so easily offended. However you should also never insult or attempt to instigate a situation with your friend. It's just plain rude. And you've done that plenty of times in the past. This is the sole reason why I refuse to even casually speak with you sometimes, Ives. You also are very belittling when I play with you in games. Constantly making fun of my play style, calling me a noob, etc. I play with many other people and never have to deal with shit talk like that. I get along fine with everyone else on this community, but every time I have gamed with you, there is always some kind of drama.

This is the way you are, and I accept that. I simply avoid talking to you at times, because I know I will inevitably be pissed off. Honestly, I have a great deal of respect for you, and what you've done for PSO Version 2. You've done a lot more than a lot of other people, it's just the attitude that gets to me. From your perspective, maybe I'm being a butthurt baby. So be it. Perhaps it's just better if we avoid each other. This is why I don't even talk to you sometimes. Colin has gotten pretty pissed off in the past as well at some comments you make. I know you mean it as a joke, but at times you tend to be really harsh. It angers me when someone insults my ability or playstyle, because I've heard things like that my whole life. And those people didn't mean it as a joke. Maybe you do, but I still don't like to hear things like that. You wouldn't joke with a survivor about the holocaust.

That was an, um, interesting thing that happened over the past 5 days...

Well, on another note, I can finally fight hard flaz now! I just got to put aside 3 hours or so, but I'm totally pumped! 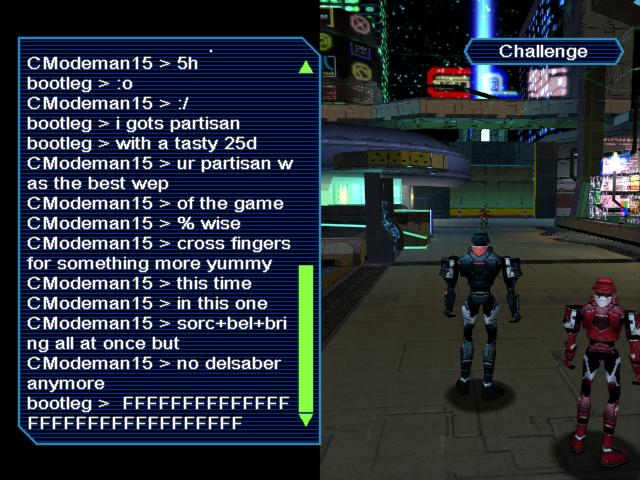 So happy for that to be announced. 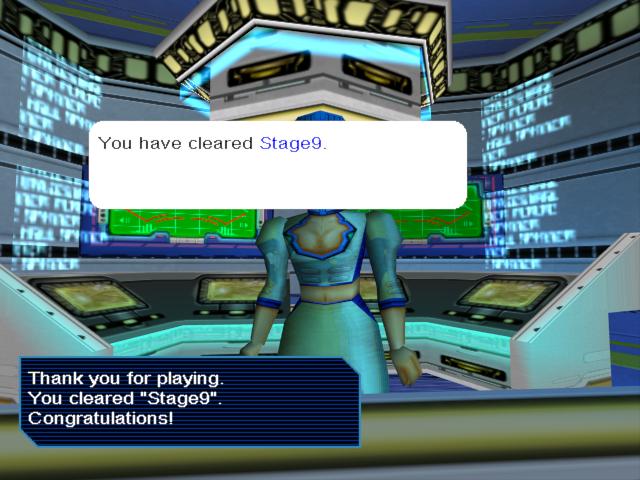 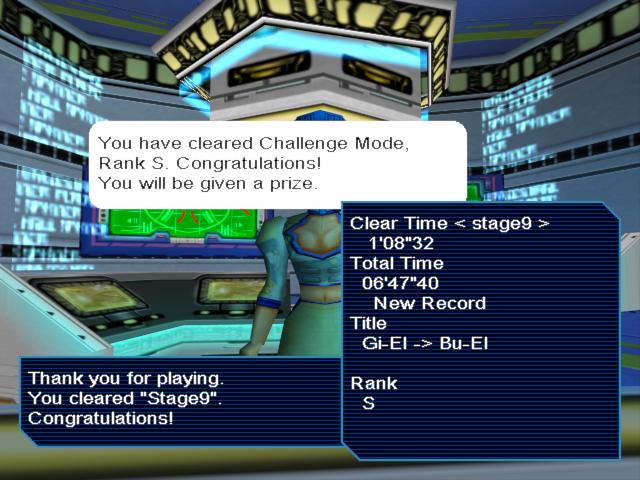 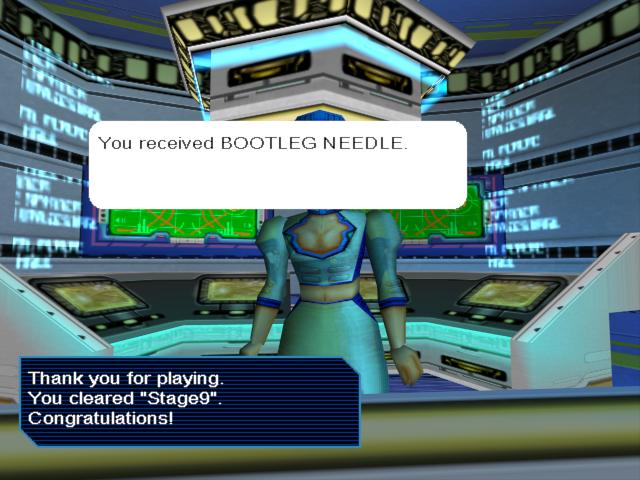 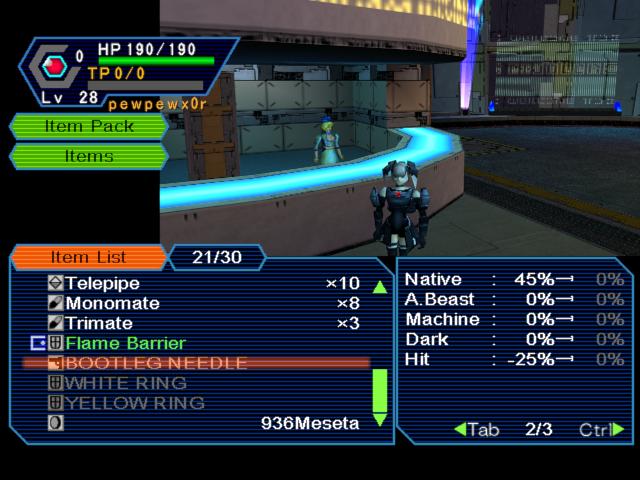 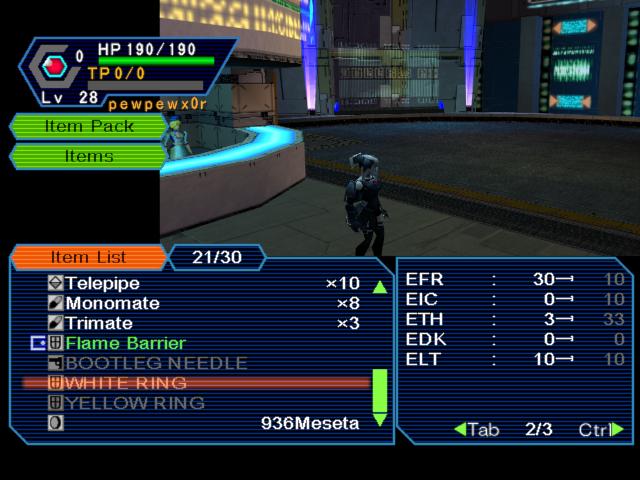 Thank you Ives for helping me with the adventure of challenge mode!

Right after I told him to not get hit by megid I get killed by it D:

An enemy died in front of that crystal thing and an item dropped inside of it, we couldn't pick it up so we kept walking into it and we got nailed in the back with the bringer's lolcannon because we weren't paying attention. Colin somehow managed to pick up the item after itemwhore

Raging at Colin after a glitch and some annoyances srankspecialwhore

Well now... unfortunately I lost this due to the server fucking up during a transfer and thinking that I dropped items that I didn't drop. >_< HOWEVER...

PSO made it up to me. 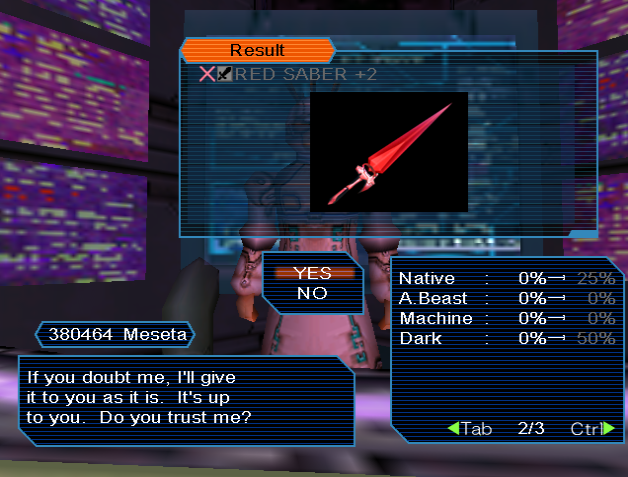 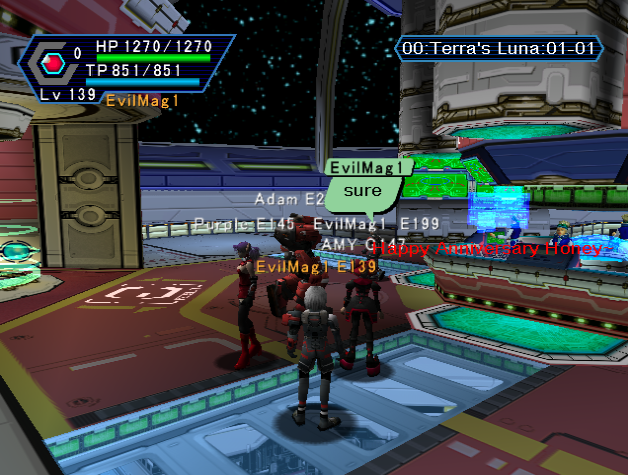 I haven't posted on here in awhile so I'll add a few more to the collection, Baron and I were playing today and yesterday 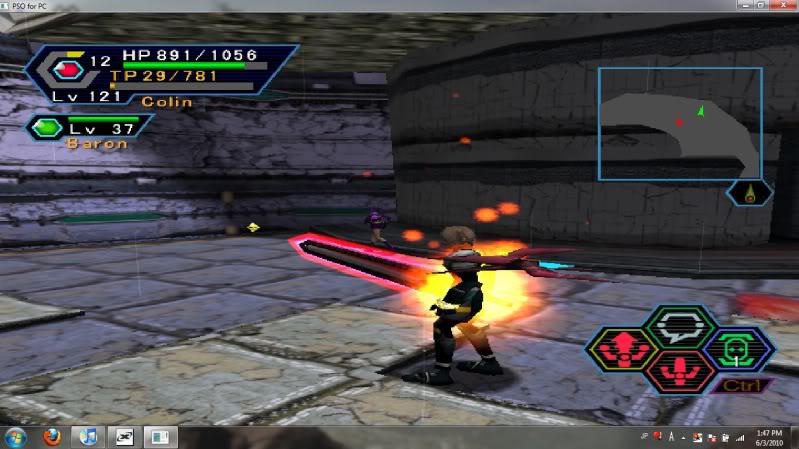 Brought out ze flaming HUmar for the occasion 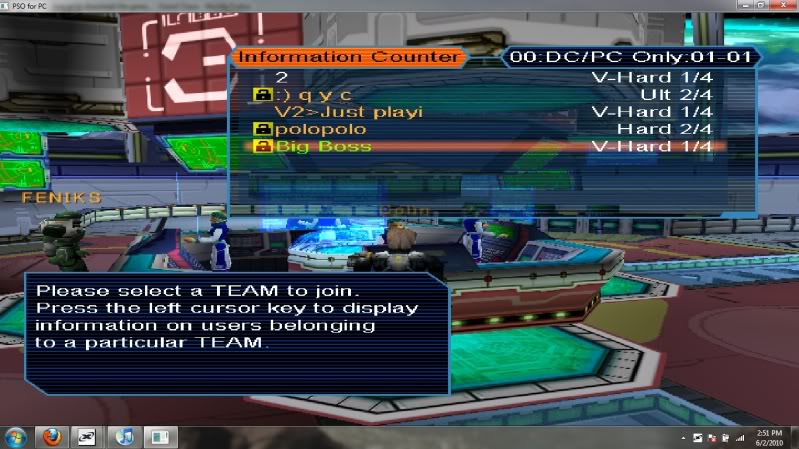 this one is a bit of an inside joke, Gilg has fanz 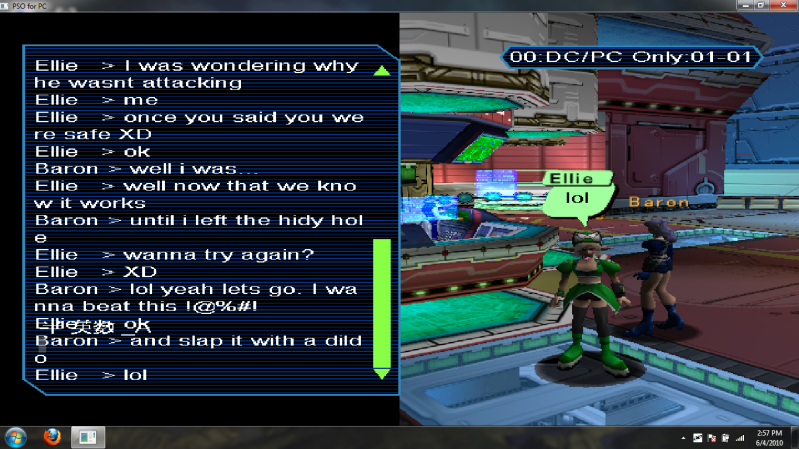 A bit of Garon's Treachery frustration, we finally beat it after about the 5th try xD, but due to a glitch we didnt get the Rakonia stone, Baron's idea of revenge is a bit....interesting to say the least o.o 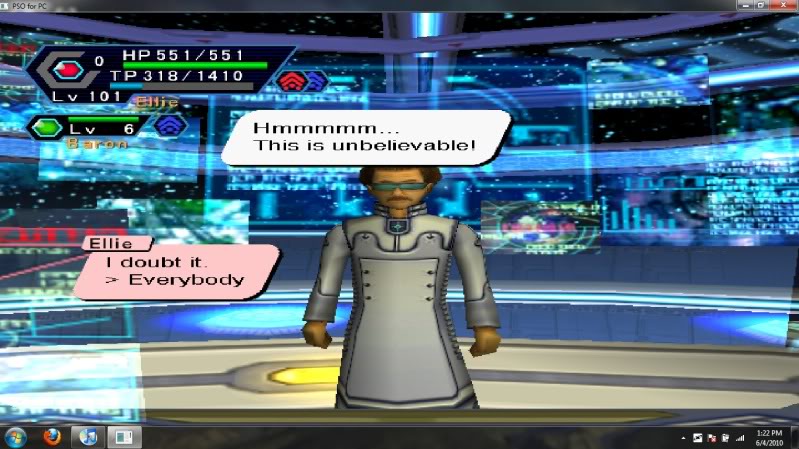 its a shame you can't interact with NPC's to a bit higher level, I would have loved to have seen his face after she said that

yeah its stretched, playing in 1366x768 resolution does that, it looks better on my screen than it does in the screenies though lol

because it doesn't look bad on my screen XD

Me and a bb buddy got bored one day. 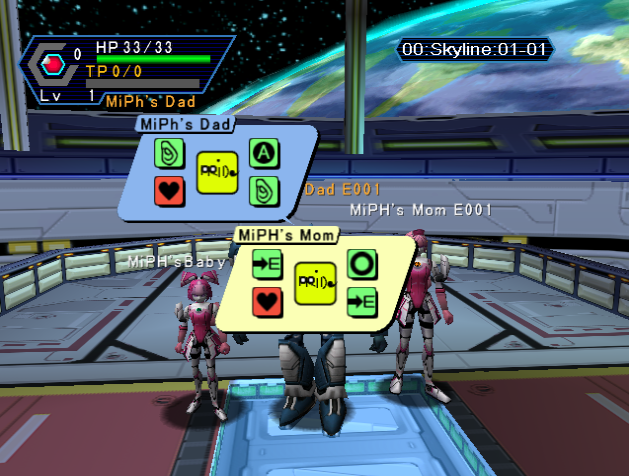 So I was playing today (something weird happened too but more on that later) walking around and i noticed something about my character...She has a bloody tramp stamp...I guess HUnewearls are pretty trampy..Who knew..

its cuz weird things happen when in a room wif moop.

Lol no thats not it. Actually, I lost my character again, so last night I made a new one...Then I lost that but regained the previous one...So it's kinda leavin me scratchin my head.... 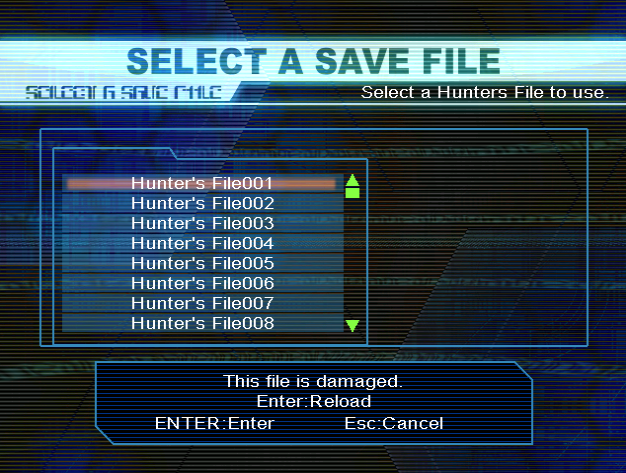 I did backup my shit and file is still damaged, I'm not fucking restoring again.

This is my reaction when this happened... 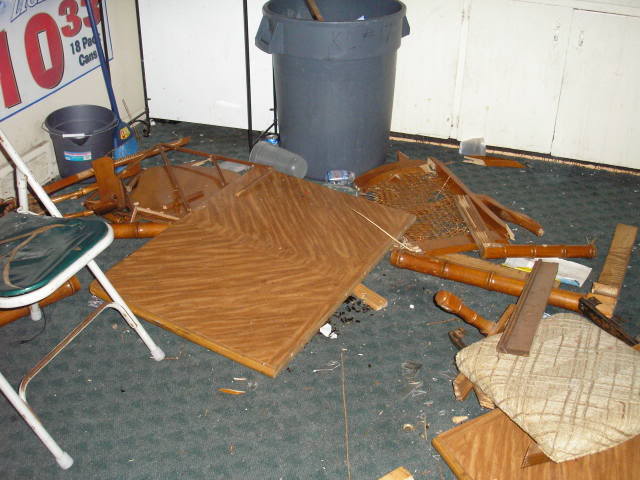 Similar topics
» pso2 screenshot gallery
» How to get a screenshot