Here it is, our dedicated rare finding items thread!
I was very delighted to have found today:

Okay, go a bit into the past: I download Ives' torrent, get PSO PC up and running, start a character, play for a bit, and find a blue rappy. It was just my third time going through forest normal, and, BOOM! blue rappy! Unbelieveable. I know this thread is for rare items, but, in all my hours of playing PSO, lemmie tell ya, blue rappies are uber rare. On the DC I would play Fake In Yellow over and over again just for a chance to see one of these pretty creatures. On PC, it's like I don't even have to try, I see so many.

Lol, I found one of those in the other day either

I've found about three Pal Rappies (I think that's how the blue ones are called) in BB even in Normal, but still none in PSO. However, I have been finding Varistas by the truckload and yet again another Parasite Wear. Funny thing I didn't know about, Parasite Wears can be slotted!

The other day I found one with 1 slot and was O_O; Now, if only I could find one with 4 slots, that would be sweet

AddSlots are not present on PSO, are they?

Of interest I found an item which I never saw before and am unsure of what to do with it. It's called something like Proton Regen Gear, and the description says the regenerative properties are not installed or available. Any guesses?

You are correct, there are no AddSlots. Those were introduced in Ver.3.

Thanks for the info, can't wait to find those regen gears

Reached Vhard Mode today, so the findings have changed a bit. Alongside the usual DB's Sabers and Photon Claws, been finding Brionacs, a cool Club of Laconium (30/15/15/0) and some Crush Bullets and Visk-235Ws. Too bad I'm not playing as a Force or Ranger, ha.

There is Parasite wear: De rol and Negal. I think you can find Parasite wear: Negal in forest vhard... or was it ult? I know I've found those with slots!

Argos wrote:Thanks for the info, can't wait to find those regen gears

Well due to my lack of internet at home I've been playing PSO PC offline. I created a HuCast which I normally stay away from the bot classes as I like to have some techs like Resta and Ryuker to back me up.

So I'm in Hard mode and I finally get my first rare drop of this game/install.. but as my luck goes it turns out to be...

Now being 0 slot it wouldn't have matter much to me anyways but it would be just my luck my first rare drop I get which actually parasite wear is a decently rare drop, not something like a Varista like I thought I'd find.. is something I couldn't use even if I wanted to.

..whats next a Heaven Punisher...

I've FINALLY seen a nar lilly on pso pc. It dropped a hero/ability, no surprise. But, a few minutes later, pso crashed and I lost it. At least I got some nice screenies of the nar. (might post later)

AND, my purplenum HUcast found a DURANDAL in Ruins normal.

For some reason, the highest level of the base rares are actually somewhat rare.

stasher wrote:Okay, go a bit into the past: I download Ives' torrent, get PSO PC up and running, start a character, play for a bit, and find a blue rappy. It was just my third time going through forest normal, and, BOOM! blue rappy! Unbelieveable. I know this thread is for rare items, but, in all my hours of playing PSO, lemmie tell ya, blue rappies are uber rare. On the DC I would play Fake In Yellow over and over again just for a chance to see one of these pretty creatures. On PC, it's like I don't even have to try, I see so many.

Geez, same thing happened to me, accept I found one on my first run through forest, and no quest selected. It killed me though, when I thought I was about to kill it.

I've gotten to Vhard and have been having a field day with 9 star drops typical stuff. Varista's, Vises, Justices, DB Sabers, Blade Dance... the usual. The rate at which they are dropping shocked me at first After all those hours with GCN PSO and BB I forgot how frequently this stuff dropped in the original versions.

I did however also go through the quest line and got my Soul Eater which is my current main weapon. And I did get an S Beats Arms drop which I had changed into S Beats Blades.

I'm hoping to get a more rare drop soon for something I will use.

How much does time played factor into finding rares? Like, I heard, when you hit 1,000 hours you'll find a spread needle. What else can you find?

I have considerable doubts about time or kill related rumors. I remember a rumor that said you if you killed like 10,000 enemies total with a Soul Eater, the Soul Banish would drop. What a load...


Anyways a couple hours ago I was in Vhard Caves going to activate the pillar and I ran into the red Pouilly Slime!! I've seen like only 3 or 4 of these in all my thousands of hours playing PSO. He dropped FLAME VISIT!!!

Unfortunately Pouilly Slime only drops a useful rare in Ultimate (Twin Blaze). Equally unfortunate, he only drops his rare in difficulties other than Ultimate.

Playtime does effect your chances of rares. Once you get 1,000 hours you have the ability to find the uber-rare things in the game, but your chances still suck ass.

I see.. is that why you go by the game leader determining drops? Is a Needle considered an uber rare because I found one with Ren when she was just over 1000. Ducky whined it was his because he killed the claws (I killed that one though I think >_> He hates needles anyways and would have sold it he said

). Would make sense I suppose, it IS the game leader's section ID.

Since the leader's ID is the one that determines drops, it seems fairest to me to say that the leader gets first crack at any rares since his ID is the one that let the rare drop in the first place. If he hadn't been there, the rare wouldn't have dropped or something else would have dropped in its place. Since rare drops are so infrequent, this policy doesn't need to be put into effect very often.

I also use this policy since I don't trust anybody's drops except my own. Due to the ability to hack droprates on PSO PC, you can't really be sure any drop is legit unless you're leading. As such, it irks me if one of my drops gets nabbed by somebody else. There's also a sense of accomplishment when a rare drops for you, not just in a game you happen to be in.

On GC/BB, pretty much everyone uses the calling system. Before you start a run of whatever, each person calls a certain rare drop. If it drops, that person gets the item. Anything not called is first-come-first-serve AFAIK. This policy isn't practical on Ver.2 seeing as rares almost never drop, and who needs to call a Red Handgun?

I finally ran into a pouilly slime the other day... droped a devil/technique for my HUcast. *slaps forhead*

When I first started playing PSO on my DC, I would run into those orange slimes more frequently. Later on, not-so-much.

Not properly a rare finding, but still rather nice.

Oh rly? Anyways, I am just glad I found it in a low level.

Another Nar Lily dropped an Hero/Ability, on cave 2. W00t mufuckas!
In the next day, at the mines 2 some piece of crap dropped S-beatArms (doubleW00t). And just quite after that drop, another junk machine dropped State/Maintenance! 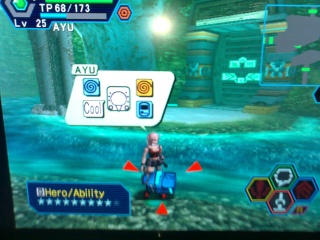 A bitter sweet drop occured as a silence claw dropped with 20% on native and 55% on dark, only problem is that I dont have a char that can use it, other than my Humar,which has many weps with much better stats :x

Interesting subject the fact of time played maybe determining rares, on my installation of PSO PC the time
played doesnt work properley and doesnt keep an accurate record of my time played, will this affect my drops?