Are you gonna somehow find a way to write that into the PSOPC torrent, or would that be too much with having to reseed the torrent and everything/impossible/Not something you want to do anyways?

Well the Torrent exists so people can have a clean installation of PSO PC using the original installers. In order to put these patches into it, I would have to modify the CAB archives inside the ISO images and such. It would be a major pain, and I'm not even sure I could do it properly. I've no idea if I have any tools that can successfully modify CAB archives.

Seismica wrote:Although i suppose that depends on how big the file is... but only editing stats, drop rates etc. it can't be that big right?

The entire patch (as well as the original files) should take up less than 1 MiB when zipped. I'll just put it directly on my site like my other patches.

furrypaws wrote:I also recall there being a "patch" screen right before you start up PSOPC. Can that be utilized in any way?

Technically yes, I think the patch screen could be used. However, 99% of all users do not even see the patch screen, because they don't use the autorun to launch the game. It's much faster to launch it directly and skip the intro movie and the patching part.

Also, this isn't the kind of thing that everybody would want to install. Ludicrous mode is, of course, rather difficult.

Aleron Ives wrote:
Technically yes, I think the patch screen could be used. However, 99% of all users do not even see the patch screen, because they don't use the autorun to launch the game. It's much faster to launch it directly and skip the intro movie and the patching part.

Also, this isn't the kind of thing that everybody would want to install. Ludicrous mode is, of course, rather difficult.

It is possible to play it starting at level 80, but you have to have Ver.2 items with percents as well as fairly high base ATP.

I'd better get levelling then, i'm downloading the patch straightaway purely for the drop rate fixes. But the enemy strength won't be RAcast friendly i'm assuming

Actually, RAcast is arguably better at soloing than HUnewearl. Because I've allowed droids to use S-Red's Blade, they have access to Shifta/Deband, and by letting them use Prophets of Motav, they also have access to Jellen/Zalure. Yes they're quite a bit weaker than what organics can cast, but they make worlds of difference. I can actually hold my own as long as I have percents on my weapons. To boot, speeding up PB/Create means that you can use Mylla&Youlla more often.

So then, what's the point of HUneys now? >_> Seems like they're just watered down HUmars, unless their odd 270 more MST and 99 EVP makes a good difference now some way or another. I mean, sure, they've got resta, but mates and pipes honestly aren't that bad.

Are their offensive techs still useless for damage?

EDIT: Hold on, is what I'm getting that Casts need percents to be better than HUneys? Either way, please elaborate a bit more.

RAcast has always been better offensively than HUnewearl. He has 200 more ATP than she does.

Droids have to be careful; they must rely heavily on HP stealing weapons to stay alive, and unless their ATP is maxed, level 3 S/D and level 6 J/Z aren't going to be enough to eek out decent damage. Droids particularly rely on Mylla&Youlla, and without PB/Creates, there will be gaps in between the times they can use it.

HUnewearl has none of these problems; she has level 15 Techniques, so she can do damage with lower base ATP, and she has the most potent Resta of the non Forces. HUnewearl can heal 1106, while HUmar is stuck at 833. The extra HP makes a large difference; she can restore most of her health with a single cast. She also has good EVP, which means she takes damage less often than HUmar even though she has less DFP. I find soloing with a HUnewearl to be easier than with HUmar, even though she does less damage.

Ludicrous mode is designed to be challenging even when you have good equipment. My test RAcast is level 200 and has 20-30% weapons. Percents make a huge difference in Ver.2; they apply straight multiplication to your ATP. HUnewearl has a measily 2100ish ATP with an Imperial Pick and Shifta, but with 40%, that's 2100 x 1.4 = 2940 ATP.

Also, enemies in Ludicrous mode have, for the most part, identical resistances to Very Hard, i.e. each enemy's weakness is 0. HUnewearl can hit 200+ damage with Rafoie/Zonde/Barta, and 500+ with Grants. Techniques are actually fairly useful for finishing off enemies, especially irritating ones like Claws which don't like being targetted and also appear in swarms.

Hmm...so HUney is sort of like a more stable performance character, while Casts have to improvise offline without a force?

Of course, for the most part, online with a force, HUney loses.

All classes become uber when Forces are around.

HUnewearl is the most balanced Hunter; she can both support herself and others better than HUmar, but she pays for it with lower damage. HUmar can do more damage, but he has to spam Resta twice as much to heal and he takes more hits. Droids have the benefit of very high base stats as well as traps, but they need to use special equipment to solo (S-Red's Blade and Prophets of Motav) without Mylla&Youlla, and they need Mylla&Youlla to solo effectively (killing can be a bit slow with level 3 S/D, but it does work). Each class has pros and cons. That's not to say that it's balanced, but I've tried not to screw over any class with this. If I hadn't enabled S-Red's Blade and Prophets of Motav for droids, they would have been really screwed when soloing. (In Ultimate mode, the only way for a droid to solo Ruins online is to get beat up until he can use Mylla, and then kill while the spell is in effect; he can't do damage without Shifta and percents.) It wasn't my intention to make HUmar mode, i.e. make the enemies so strong that HUmar has trouble killing them, and thus all classes that aren't HUmar can't do jack. 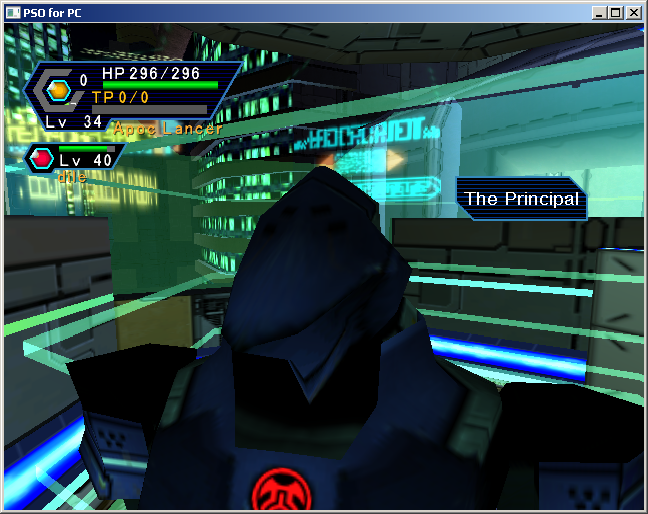 lol. And we thought he was human.

So THAT is Ludicrous Mode... I don't think I would live unless I was level 200. -_-
Seriously though, I'm always losing track of my HP. I usually find myself in 1 HP close calls. In HARD MODE.

The fact that the NPCs reduce me to spamming Techniques from the hallway is so humiliating. Damn you, NPCs.

The enemies are that strong in Ult Ruins at HUney max stats?

EDIT: Wait, I think what you're saying is ASH is so stupid he can't take the enemies and dies frequently. In which case, DO NOT WANT. </3

ASH gets totally raped in standard Ultimate, and Ludicrous is no better.

Holy shit. RAmar will love this.

Decent I suppose. I should probably give it to RAcast for lolFoie.

Oh joy, I find the useless one, lulz.

It's not a GODS SHIELD, but I'll take it. xD

That's a lot of ice.

RAmar will need this. xD

Here are some screenshots. It took me a while to figure out how to get them, seeing as I don't have an F14/Printscreen key, but I remembered there was a free trial of Fraps, so I've just been using that. Here goes! 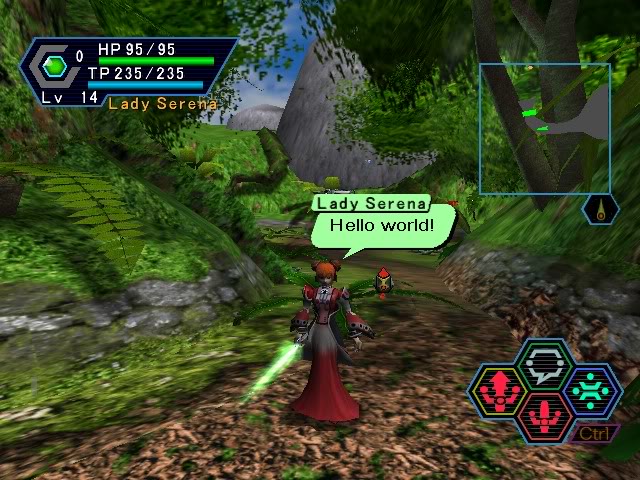 By world, she means Ragol of course. 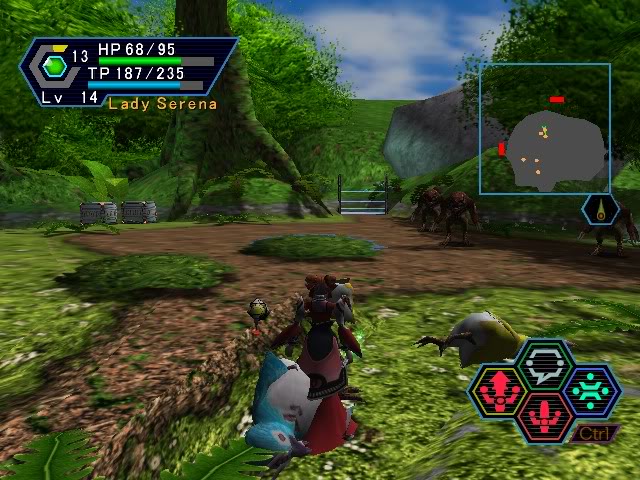 Found this guy in the first spawn of a quest of course. Thanks for the 705 meseta. >_< 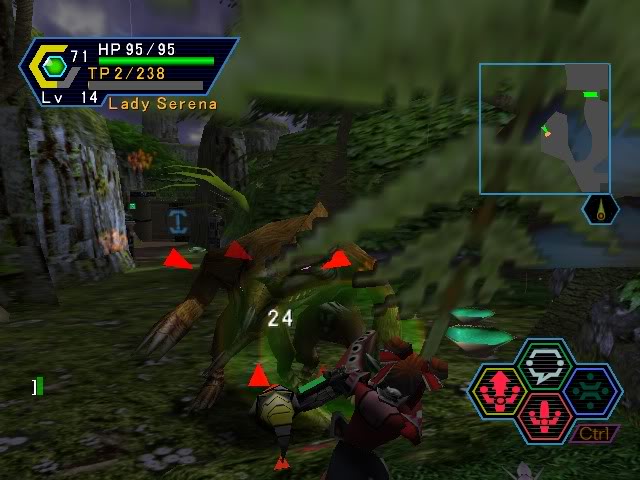 Oh no! Get away from me! 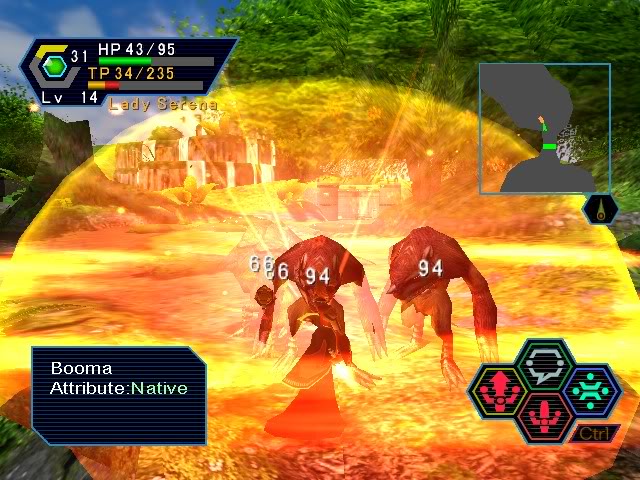 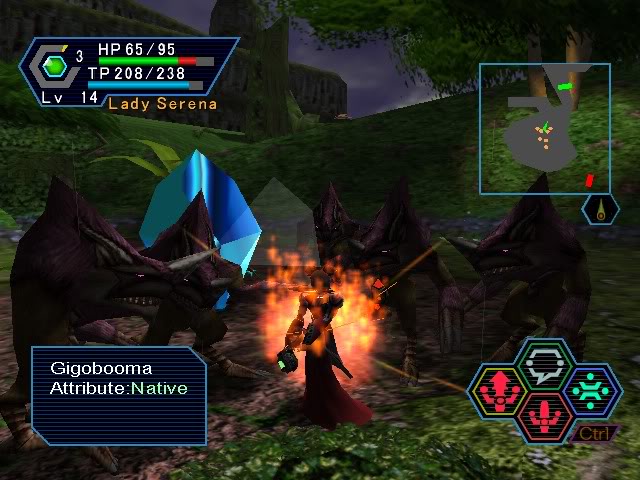 The monsters quickly tired of Serena's tactics and decided to give her a taste of her own medicine. Good thing her robes are fire impervious. 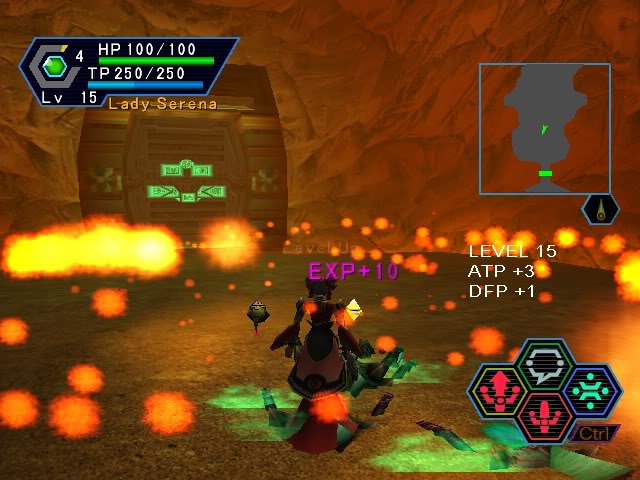 Level 15 by fire, which means I can finally use Ryuker/Reverser! Go FOmarl! XD

Take that, Crystal of Air!

Shame on me for double posting, but I think this should forgive it. 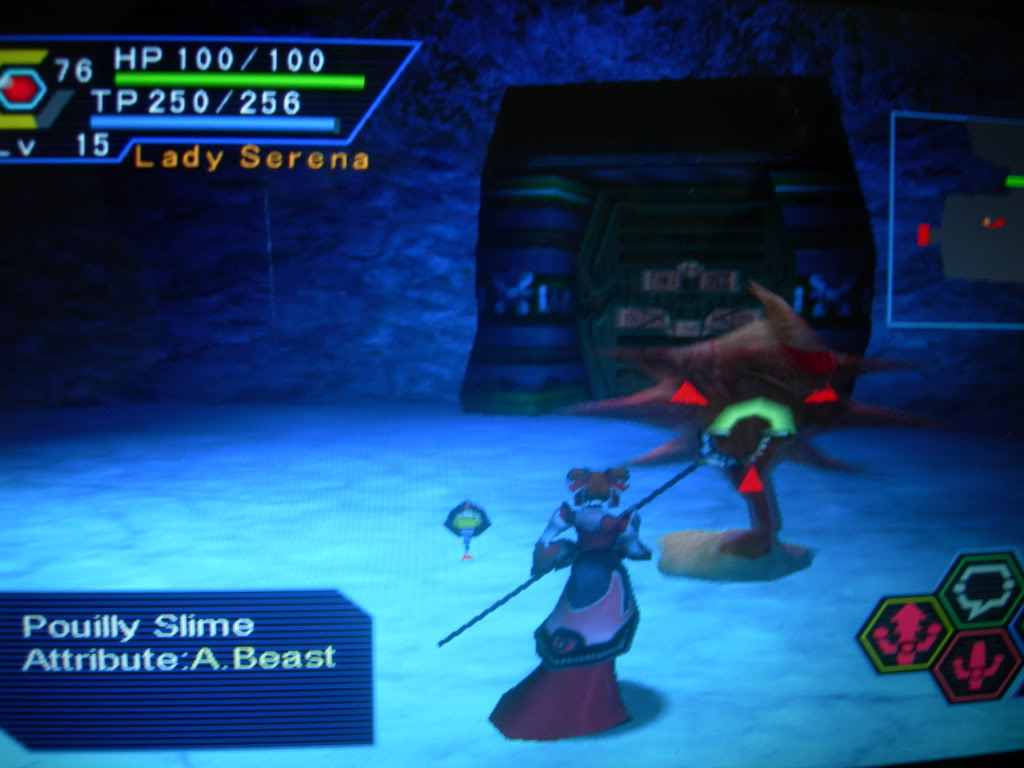 Maybe I should've named her Lady Luck instead. XD 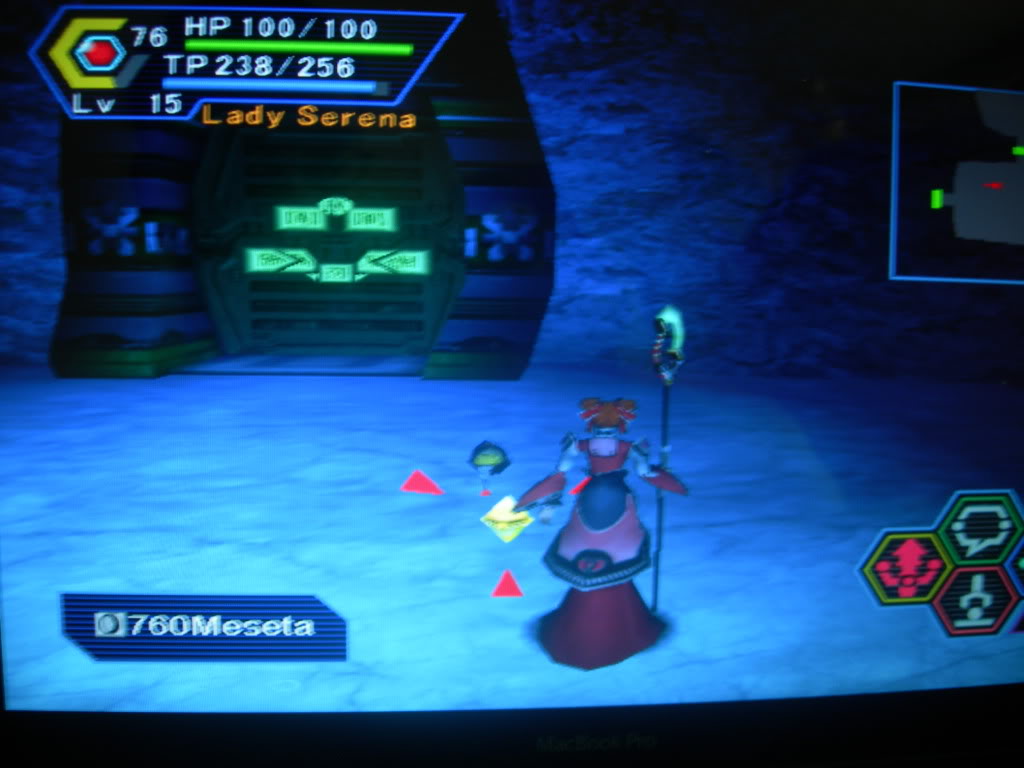 The one morning I forget to turn on fraps...

The images were slightly cut off by the forum due to being massive from a physical camera, but you can see the whole thing if you right click and select view image in a new tab/window.

lol, I have like 20 scape dolls in my bank right now. -_- I've found they aren't very rare.
Anyway, sucks to be you with that Pou- whatever it's called. I always think that rare monsters drop rare stuff, but NOOO, that doesn't happen till you're on very hard, but then they're useless. 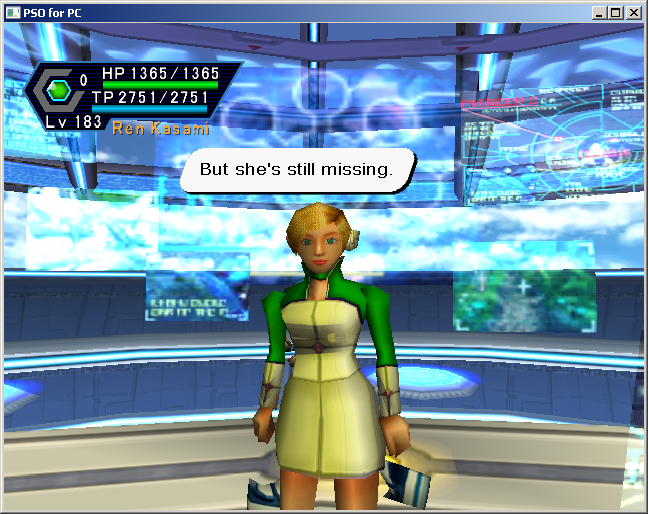 Ren is sneaky like that. I mean.. Look at that footwear. That screams secret agent.

So secret, her employers have absolutely no idea where she's at.. -_-

NEVER fear. The PLATFORMS are here.

Yeah, I was bored.

This is what happens when no one else is online.

*EDIT for another pic* 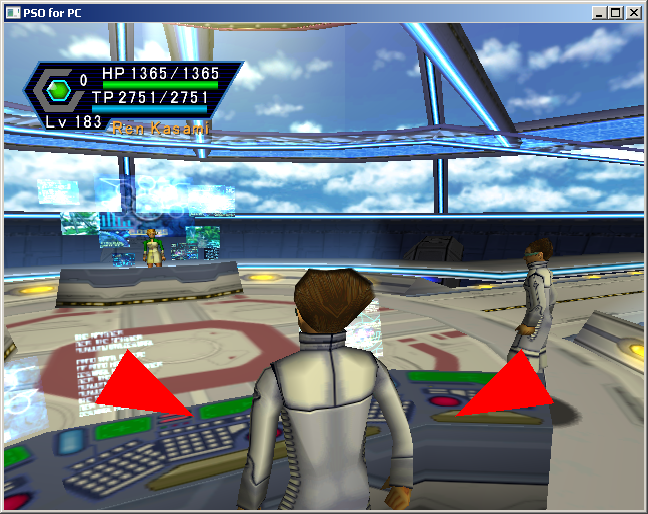 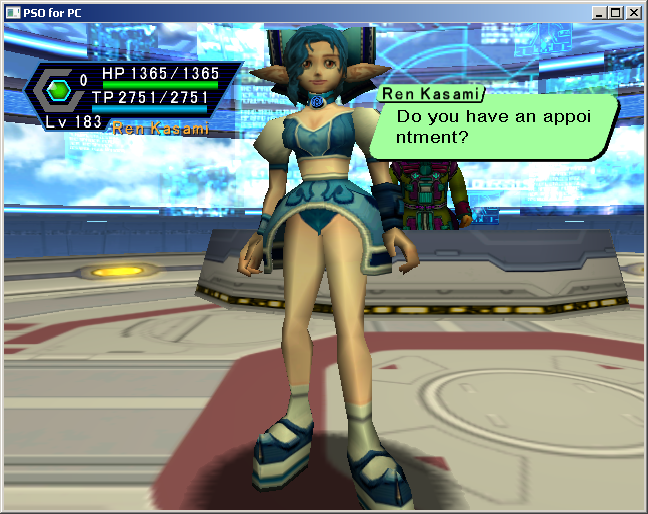 Yes.. Even hunters have to find ways to make money when the guild is short on quests..

Now why couldn't the staff at MY school look that young a dress more... unique.

I'd have been staying after school all the time to get "tutored".

That would actually be very amusing. Too bad though. We had old hagz. ;(

Don't worry. I watch over her.