As mentioned above in the tittle, this will be our PSO Palace Hunters Diary Thread!

Anyone who wants to share their adventures along the way, just for the fun of letting the others know how did their hunting day go, should post it here.

In order to keep this place clean and organized, here are a few rules:

1- Before start writing your diary adventure, make sure to put in the top, it's date (xx/xx/xx) as well as your char/ version used.
2- If you would like to comment any of each others diary story, please do it in only one post, whereas you should edit it as many times as you want. To let the others know of which story you're talking about, just put their names/ date on it as shown in the following example:

3- You are free to write about anything that has ever happened in the past, just make sure to put it's year at least, if you don't remember the whole date.
4- I am doing this for the fun, but also because I think I am getting a little rusty with my English, and so I need to practice it a bit in some way. I please ask you, if you don't mind, to correct any possible grammar/ spelling errors I might do.
5- If you want to give a better background of your adventure, you should also post any screenshot you might have taken. (don't go above the 600 x 450 resolution)

What a great night it was! I played until 3.30h a.m.! It was a 4 player V1 Normal mode team on the Skyline ship, block 1. I must express my happiness due to the fact that there are still a few players who make V1 compatible teams! Thanks a lot to those guys!
The members have changed along the journey. I've marked the game as /legit, too bad there were people using hacked stuff, and willing to give me mags x_x. Anyways, they were all nice and we had a great time.

First things first, and we whipped out forest beastiary, as well as the first boss. Theres is a funny aspect I would like to mention. I need to get another extension cable for my keyboard, because I changed my DC display and it can't reach my bed! »_«' So now I've been using the Word Select menu, and I am glad so far with it. I knew it offered many pre-done sentences, but never though they would come so handy!
Then, we went off to the caves, and by doing the door glitch just once on cave 2, we managed to reach cave 3 easily. It's boss was a piece of cake and teh prize boxes were cheese as always.
Throughout the adventure if I do remember correctly, I managed to find 2 HP materials =D
I also evolved my mag into a Rudra, at lvl 35, near the shops in P2 XD
With two bosses beaten we decided to go hunting further deep into the underground mines. Vol Opt was a joke and finally we picked up a Quest at the Hunters Guild counter. Endless Nightmare in the forest, was the chosen one, whereas we exterminated all the native creatures either by melee/ weapon attacks.
We then received the reward and were teleported to the lobby.
In the end, I was getting so sleepy that I decided to visit Terra's Luna Ship. There, I wondered around making random Word select sentences like "FILL white mouth »Everybody"; "OLE----!"; "Cheers!"... oh and I also made a Dreamcast symbol chat, similar to one that I saw on Tweegs website ^^ 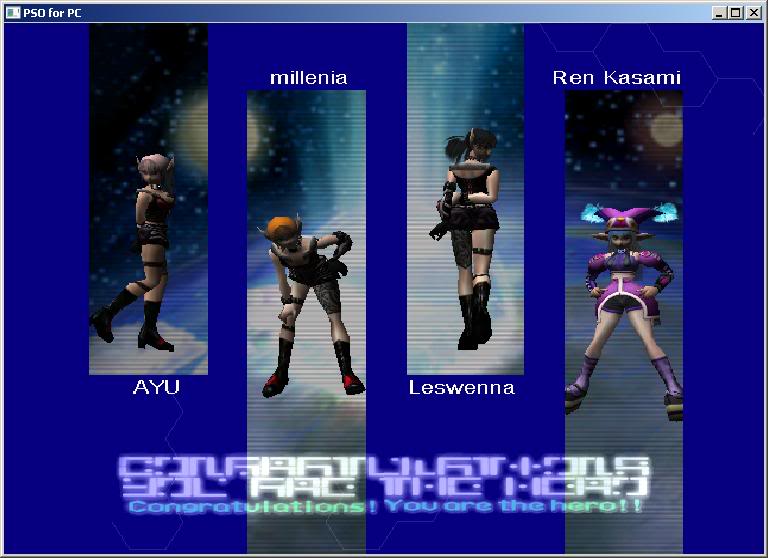 Wing 26-10-08
Edit 1:
Hehe, hey there! I am glad you took a picture =)
Indeed, my DC reseted and I don't know why. Yesterday, I played a quest with v2 players, and everything went well.
Edit2:
No problem dude! Too bad Crono won't fix anything DC related AFAIK, however I won't give up playing v1 quests just because of this.
Btw, don't forget to follow the threads rules ;D
Edit3:

Aleron Ives wrote:Quests can work between Dreamcast Ver.2 and Dreamcast Ver.1. They won't work between Ver.1 and PC. I don't think this server is probably coded to make Ver.1/2 questing work, though, so you'll probably FSOD unless you only play quests with other Ver.1 users.

Wrong. Actually when I meant v2, I wanted to say PC. And so I went on a quest yesterday with PC players, and I didn't FSOD.
I've created a new thread for this talk. Check it out here.
Edit4:
10/26/08 - Norana
If it isn't our newcomer! =D I am glad you joined the "Hunters Diary Thread", and what a well written little story you bring us! I really felt delightful while reading it ;D Keep em coming!
Edit5:

Aleron Ives wrote:By the way, are you aware that you can rotate the characters on the win screen in Ver.1? When you see the win screen online, press L/R and everyone will spin around.

OH really? I gotta try that, woOt!
Edit6:
25/10/08 - Noraa yume
What a tough run it should have been! It seems you're a skilled hunter, and back in action =D
I really enjoyed the screens, they make this section more worth watching/ reading! God job!

Version 1 and 2 compatible games are quite buggy. From what I understand, doing quests is a no with them. They have a high chance to crash like that. I had forgotten about that when we loaded the quest... >E

Now I remember why I despise the caves so much.

It took me about 2 hours or more just to get through the 3 levels of the caves, hacking and slashing my way through countless monsters and dying more than a fair share of times. The minor highlight of the whole ordeal was a Luck Material dropping from a random Evil Shark in Cave 3. That was a nice little surprise. All and all, I managed to make it to De Rol Le with my character and sanity in check.

This is when I wanted to pull my hair out. It took me a whole hour just to kill De Rol Le, and about 45 minutes of that was just breaking his stupid skullcap. I felt so incredibly weak with my +1 Daggers doing so little damage to the thing and taking so long to kill it.

Finally after a long time, I was successful! De Rol Le finally fell and left me with a Scape Doll for my battle spoils. It was a productive, but very long run, but in the end it was a good day.

Now it's time to conquer the mines...

Maybe you shouldn't be playing areas that you're not strong enough to play.

I lost the one that could have been the best snapshots of all time...
I hear you guys ask, than what would that be?

You all probably know that when Dark Falz is defeated in normal mode, he drops Ricos Red ring right?
And no, it didn't just fell next to my char, it was way rarer than that. When the boss was about to be defeated, in the last second of his life, he punished me with a deathblow so when the ending movie scene showed up, my screen started turning bloody red. Then, when the ring dropped, I could see my dead char behind it fallen into the ground! It would have given an hell of an awesome shot, damn it I couldn't take it!! "$&@! After a few seconds, before the "Hero snapshot screen" showed up, I could see my char disappearing from the ground, leaving only the Red Ring in the scenery...
...it was a sad ending to me.

By the way, are you aware that you can rotate the characters on the win screen in Ver.1? When you see the win screen online, press L/R and everyone will spin around.

Jellen doesn't do anything to Falz.

Did a nice run with a friend today for awhile, it was quite refreshing. Especially considering the fact that no one had been online all day...

So getting in a nice game before the end of the night was lovely.

Ah window mode.. I curse thee... At least I can take pics via Microsoft Paint @_@.

That's a goody... Had a nice run to Falz. Too bad my teammate killed me xP 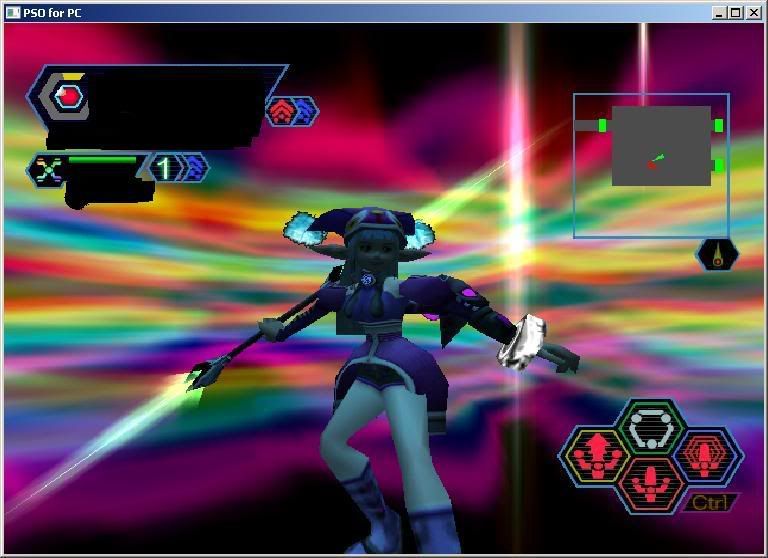 I left my Smith and Wesson at Home.. Meet Vulc and Mech? 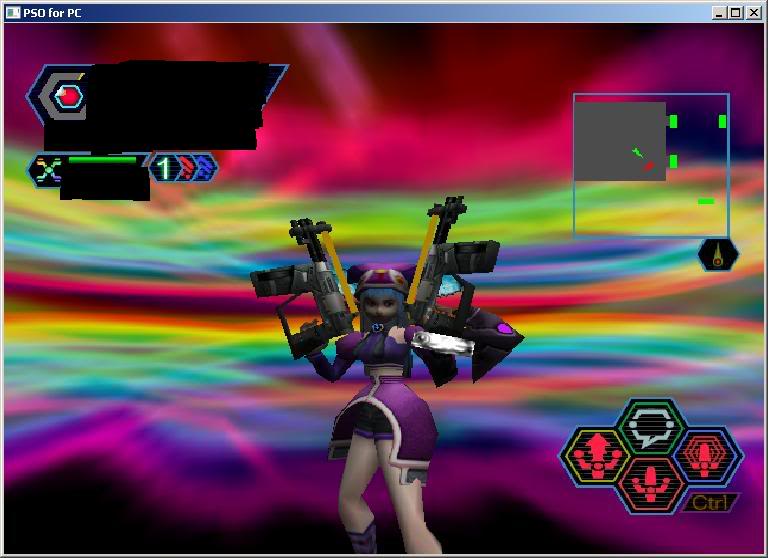 Well well... two guns are better than one.

Oh.. you'll never guess who we are. I have edited the pictures. Muah hahahah!

Stash said she had s/d when she did not on my screen, 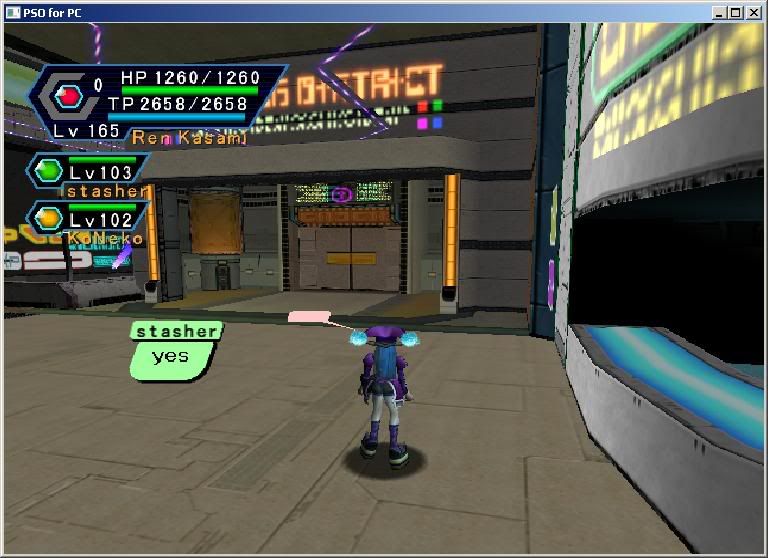 Probably lag anyways.. I've been lagging on pso a lot lately since I installed some new software.

And met some new guys today, nice bunch. Did a lovely f2f run: 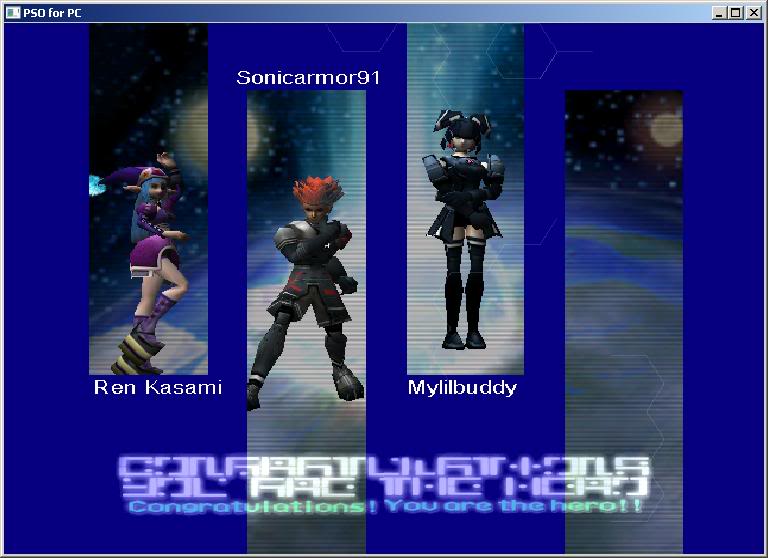 Today, I decided to give use to my Sega server character. I haven't used it in a while, cause it had every single hacked thing I could get from ages ago on those servers, and since I am now legit I haven't touched this save file.
However, today was the day I created a Mule Char on PSO PC and decided to drop everything, and continue my adventure with this lv110 char.

I just kept myself a KALADBOLG with no percents nor anything and an IMPERIAL PICK +20 with 15% Machine. A Delsaber's Right Arm, a crappy Valiant Frame with 3 slots, Antiparalyses x6, a Scape Doll and 732654 meseta. Seems more than fair huh? (now I dunno how am I gonna play Ult -_- with no mags or armors, or even hacked weps gasp!)
Wish me luck guys! 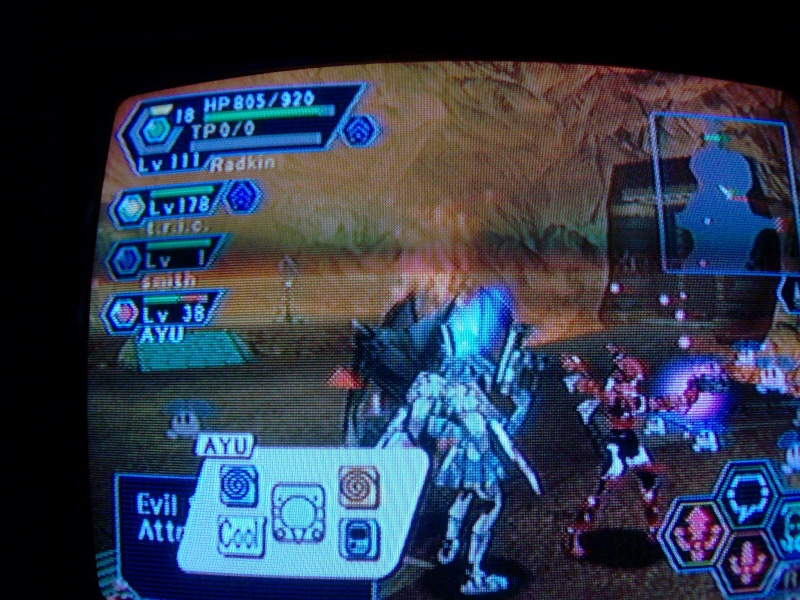 that must have been right before I signed on to play with you guys, after that we went to ultimate mode, which was fun for Seifer, lol

While playing offline Mines 2 normal, an enemy dropped BOOKOFKATANA3. I don't know what on earth it is. Help me!!!

Flash T.H. wrote:While playing offline Mines 2 normal, an enemy dropped BOOKOFKATANA3. I don't know what on earth it is. Help me!!!

Woooah, that's a feckin hard finding!! Congratulations! Once you gather all 3 books, I guess something happens, some weapon is unleashed? I'm not sure, but hey, what a nice drop you got!

You ruined the surprise! XD

Thanks! Thing is, I showed my sister (she plays PSO too) and she thought it was worthless. What I did though is that I thought it was an enemy part of some sort, and I tried to give it to Dr. Montauge and he told me to find parts in the Mines and the Ruins. I went WTF every single time.

Montague says to give him enemy monster parts, not reading material XD

Wing wrote:Montague says to give him enemy monster parts, not reading material XD

Yeah... um, at first glance... I kind of thought it was something the Sinow Beat used...

yeah, my brother had the same problem, Flash

he got the book as well, could never find the right sword though lol

Yeah... um, at first glance... I kind of thought it was something the Sinow Beat used... 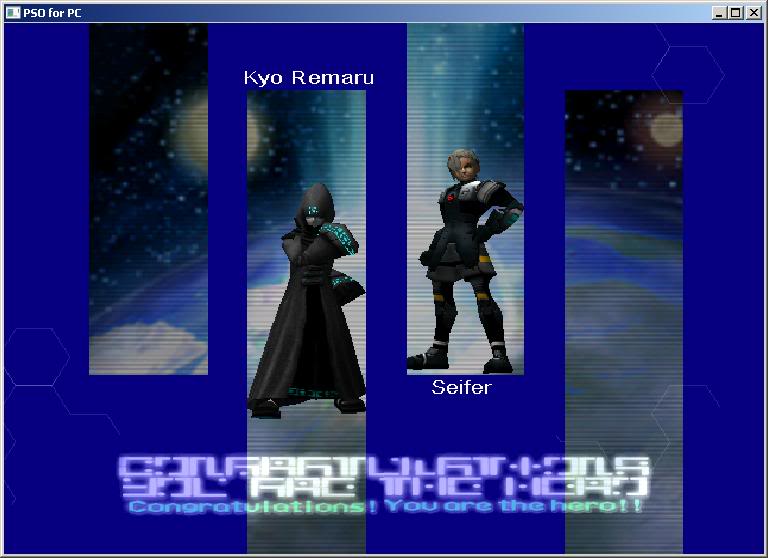 I am the mysterious one